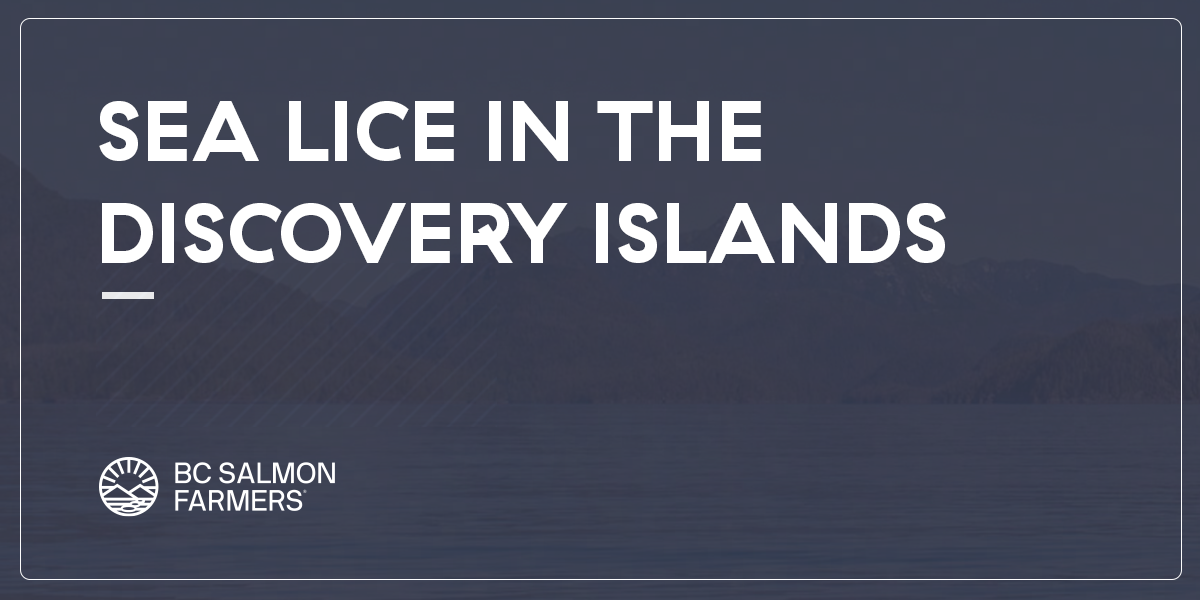 By BCSFA TeamNovember 25, 2021No Comments

“Five years of sea lice monitoring has demonstrated that sea lice levels have been low with most out-migrating salmon not infected by sea lice. Additionally, we did not see sea lice levels change after decreased production of salmon farming in the region,” says Brian Kingzett, Science and Policy Director for the BC Salmon Farmers Association.

Sea lice on salmon farms are monitored and treated under both the Department of Fisheries and Oceans Canada (DFO) regulation and individual company veterinary supervision. Analysis by DFO demonstrates that sea lice levels on the Discovery Islands region salmon farms have been below the strict DFO regulatory thresholds during salmon out-migrations for all but two months over the past 10 years.

Additionally, the Cohen commission in 2012 determined that sea lice was not a concern for out-migrating Fraser River Sockeye salmon, and research published since has shown that juvenile salmon spend very little time migrating past salmon farms. Parasitic sea lice are part of the natural ecosystem and have coevolved with salmon over millions of years, along with immune responses in salmon to the presence of lice.

It should also be noted that the removal of farms, while not showing a measurable change to sea lice levels in the Discovery Islands region, has seen the elimination of 24 per cent of salmon farming production in BC,  and the loss of nearly 1,500 well-paid full-time jobs in both Indigenous and non-Indigenous rural coastal communities.

BC salmon farmers have invested millions of dollars in robust, innovative technology to mitigate and manage sea lice and are continuously looking at ways in which innovation can be adapted to improve overall operations. Examples of this include nearly $100 million invested over the last three years in new vessels designed to gently remove sea lice from farm-raised salmon through mechanical means, fresh water, or hydrogen peroxide baths. All these technologies can remove and capture lice and eggs for responsible disposal on land – removing them from the ecosystem and helping to lower the overall lice population in an area.

“BC salmon farmers are committed to responsible production of low carbon sustainable food production that supports the blue economy, and Canada’s aggressive carbon reduction targets. We are an industry that operates using rigorous science to support our practices. Irresponsible claims by activists have led to public confusion and have contributed to decisions which ignore science such as the Discovery Islands decision of 2020,” says John Paul Fraser, Executive Director of the BC Salmon Farmers Association.

“As salmon farmers, we call on DFO and our political leaders to look deeper and focus efforts on climate action and habitat restoration rather than use salmon farming as a scapegoat for political goodwill, which science has demonstrated will not provide tangible benefits for wild salmon populations. The solution is complex, and like we saw at the recent COP26 climate change conference, will require the cooperation of many industries, including salmon farmers – to support the solution,” says Fraser.

Farm-raised salmon is B.C.’s highest valued seafood product, the province’s top agricultural export, and generates over $1.6 billion towards the B.C. economy, resulting in thousands of jobs. The B.C. Salmon Farmers Association represents over 60 businesses and organizations throughout the value chain of finfish aquaculture in B.C. Our members account for over 95% of the annual provincial harvest of farm-raised salmon in British Columbia.